King’s Advanced Parkinson Research Centre in Dubai is directly linked with the King’ Parkinson’s Centre of Excellence in London.

Parkinson’s disease is a progressive neurodegenerative disorder that affects a part of the brain known as the ‘substantia nigra’, which produces a brain chemical known as dopamine that is important for controlling movement. The disease, which progresses gradually and gets worse over time, leads to stiffness, difficulty walking, shaking or tremors, trouble with coordination and balance.

Although there is no cure for Parkinson’s Disease, there are ways that the symptoms can be treated or managed. Experts in the field consider management of advanced Parkinson’s Disease to be a complex affair. This is because as the disease gradually progresses, the patient is usually put on a cocktail of oral medications, sometimes up to 20 tablets a day or more.

Although these oral medications may be somewhat effective in managing the Parkinson’s Disease symptoms, sometimes the side effects include delayed gastric emptying (the time that takes food to move from the stomach to the small intestine), poor gastric absorption (absorption of liquids and salts through the gastric mucosa), which can lead to medication overload, hence causing severe intestinal obstruction, and possibly life threatening Aspiration Pneumonia.

King’s Dubai brings the latest treatments such as non-oral and device aided therapies for advanced Parkinson’s, (including Stage 5), from London to the UAE. 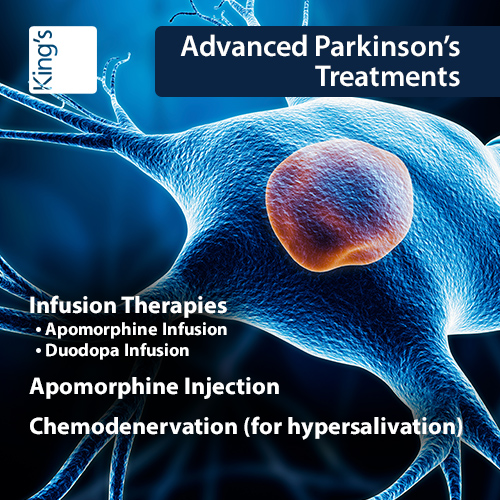 We are proud to be the first centre offering lifesaving advanced infusion therapy treatments in the Middle East region.

Our centre is made up of a multi-disciplinary team, led by advanced Parkinson’s expert Dr Vinod Metta, Consultant Interventional Neurologist, part of the King’s visiting Doctor Programme.

Learn more about our treatments.  Watch the video below and discover how a Stage 5 Advanced Parkinson’s patients, wheel chair bound for over 2 years was able to walk again and eat independently in less than 48 hours after treatment.